Get more realistic forecasts for your business with this easy-to-use formula. 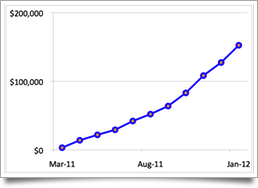 And that's true in the world of commerce. Business phenomena—sales, users, growth and such—are natural phenomena. Cycles sweep up and curve over in big S curves or bell curves, graceful waves—not straight lines.

One important trick in forecasting (and I mean real, practical, business forecasting) is finding the built-in curves inside the straight lines. And with one simple mathematical formula, plus some creative thinking, you can do that for your own forecasts.

Take the example shown here, a collection of line charts, from real data for a SaaS (software as a service) app a few months after launch. In the first chart, the blue line represents sales, which went sweeping up as the product launched. There's a nice curve there, reminiscent of the famous bell curve of diffusion of innovation. 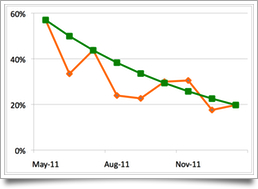 Where the ^ sign, the little arrow that's normally the shifted uppercase over the number 6 key on a computer keyboard, means "raised to the power" as in ^2 means squared and ^3 means cubed. In this case we had growth of 57 percent declining to 20 percent in eight months of growth. So the formula actually applied to the spreadsheet is:

So that gives me the underlying formula for the natural decline, which I can then project forward to create a forecast. 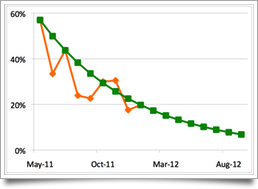 I hope the visual in the third chart, with the underlying growth phenomenon extended, show you the point of the exercise. To finish the actual curve with a future projection, I use a spreadsheet to apply the projected growth rates to existing numbers. Take the most recent month's sales and increase it by the growth rate plotted on the green line.

One final thought: Don't expect to accurately predict the future very often. Forecasting isn't about guessing right, but rather about teasing apart the assumptions so you can track results.

What forecasting tools do you use for your small business?