A long-awaited recovery in global trade is underway in 2017, according to the International Monetary Fund (IMF), though risks remain that could break the momentum. Specifically, international trade is expected to grow 3.8 percent this year and 3.9 percent in 2018, up from 2.2 percent in 2016.1 While the trend is positive, the figures still fall short of the 6 percent average growth experienced from 1960 to the eve of the global financial crisis in 2007.2

The IMF’s World Economic Outlook projects the following trends for this year:3

The Outlook set the stage for trade policy discussions during the IMF and World Bank’s Spring Meetings in April 2017 – an annual event attended by finance ministers and central bankers from around the world. Their final statement from the meetings emphasized risks that should be addressed to sustain growth in international trade.

Among those risks are measures designed to protect domestic markets and jobs, which have proliferated around the world as globalization and digital innovation have accelerated, according to the Outlook. For example, “The share of G20 imports affected by trade-restrictive measures put in place since the global financial crisis continues to rise gradually, reaching 6.5 percent as of November 2016,” according to Making Trade an Engine of Growth for All, a report from the IMF, World Bank and World Trade Organization.5

The Outlook includes a range of policy prescriptions designed to continue advancing trade in today’s politically uncertain environment. To prevent global trade barriers, the report recommends a revived commitment to the multilateral system of transparent, rules-based trade; domestic policies that share the gains from trade more widely; and communications strategies that better explain the benefits of trade to skeptical audiences. Those benefits include reductions in consumer prices, increases in productivity and many others, according to the report.

The report’s recommendations for driving trade growth focus on the services sector and on digital trade, a broad category covering companies selling goods and providing services digitally. Services account for about a quarter of global trade, the report says, and global commercial services imports grew at about 5 percent a year during 2010–15, compared to 1 percent growth for merchandise trade. “Sectors such as services as well as digital trade represent areas where further trade reform can make particularly large contributions to global growth,” the report says. However, “despite the overall importance of services in the economy, services trade remains hampered by substantial policy barriers.”

Digital innovation represents a particular challenge. In terms of digital trade, “innovation in digital technology and other services has helped to reshape the trade landscape and spurred the development of global value chains,” the report says. At the same time, though, trade policymakers have emphasized that it is often technological innovation – and not trade – that presents the greatest risk to job growth. “While it has brought enormous benefits to societies, we have found that technology has been the major factor behind the relative decline of lower- and middle-skilled workers’ incomes in recent years, with trade contributing to a much lesser extent,” said IMF Managing Director Christine Lagarde.6 She promised further study to measure the digital economy and its impact.7

Finance ministers and central bankers at the Spring Meetings incorporated many of these recommendations into their final communiqué from the Meetings. “It is important to ensure that everyone has the opportunity to benefit from global economic integration and technological progress,” the communiqué says. “We will implement domestic policies that develop an adaptable and skilled workforce [and] assist those adversely affected.”8

Global trade growth is increasing, but risks could still derail the momentum. The IMF, World Bank and WTO presented recommendations at a meeting of financial policymakers from around the world, including domestic measures to spread the benefits of trade to the broader population, as well as further opening international trade in services and digital trade. The WTO and International Trade 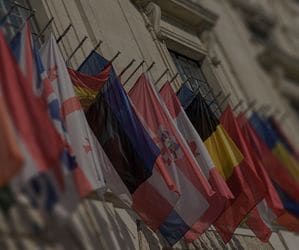 Global Foreign Direct Investment Declined in 2016, But Should Rise in 2017